The festive cheer continued earlier this week for Team Scotland, with news that the 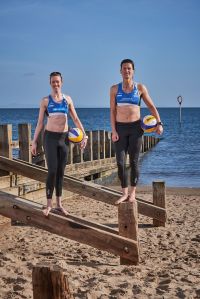 women’s Beach Volleyball pair of Lynne Beattie and Melissa Coutts has secured one of the 12 coveted places to compete at the Gold Coast 2018 Commonwealth Games.

Lynne and Mel began their year with a personal best finish on the FIVB World Tour with 9th place in Sydney back in March, before taking gold on home sand at the CEV Zonal Event held on Portobello Beach in May. After that, they topped their season with another personal best – a 5th place finish at the World Tour event in Agadir, Morocco in July.

However a disappointing third place finish at the crucial Gold Coast 2018 European qualifying event held in Cyprus in September, led to a nervous wait to see if they would earn a wildcard place at the Games.

The sport of Beach Volleyball will make its Commonwealth Games debut (6-12 April 2018) on the stunning beachfront at Coolangatta and the Edinburgh-based duo will now join their male counterparts Seain Cook and Robin Miedzybrodzki, competing in front of the packed grandstand, set to create a cauldron-like atmosphere against the ocean backdrop.

Lynne Beattie, who turns 32 on Saturday (23 December), captained Team GB’s indoor Volleyball team to 9th place at London 2012 – the first time Great Britain had a Volleyball team at an Olympic Games. She is now a Regional Development Officer for the Scottish Volleyball Association and said: “It is amazing to hear the news that we have qualified for the 2018 Commonwealth Games. We have had a long wait, but we trusted in the hard work we had put in, on and off the court, and now it has been absolutely worth it to be confirmed as the first ever women’s team to be selected to represent Team Scotland in Beach Volleyball.

“To get this opportunity is a huge reward for us, our team and our sport, but, we are not just satisfied with qualification; we want to be the best we can possibly be when we get to the Gold Coast and now we can look forward to our preparations for that.”

Melissa Coutts (47) was part of the first Scottish team ever to play and win on the World Tour, making the main draw in the Acapulco FIVB event back in 1998. She also played on the professional tour in Mexico in 1999 and is a three time British Champion.

Delighted to have their Commonwealth Games place confirmed, Mel said: “Being part of Team Scotland and competing at the Games means the world to me and will be the pinnacle of many years of hard work. Waiting for the decision was difficult but I was always confident that the right decision would be made and that the best team would be chosen. Myself, Lynne Beattie, and the rest of our amazing team will do everything we can to make Scotland proud in the Gold Coast.”

Welcoming the news, Margaret Ann Fleming, Chief Executive at Scottish Volleyball, said: “We are absolutely delighted that our women’s pair have now also been confirmed for the inaugural Beach Volleyball competition at the 2018 Commonwealth Games in Gold Coast, providing a fantastic opportunity for this performance sport to be showcased. It is testament to all the hard work of the athletes and the sport as a whole that Scotland will be represented in both men’s and women’s competitions.”

Team Scotland Chef de Mission Jon Doig OBE said, “Congratulations to Lynne and Melissa on their selection for Team Scotland 2018. It has been an anxious wait for the pair to see if Scotland would be offered one of the 12 women’s places and I am delighted this has now been fully confirmed. They can now go into the New Year fully focused on ensuring they are ready to compete with distinction at the Games next year.”