For the first time ever, Greenland competed with their regional Volleyball friends in the 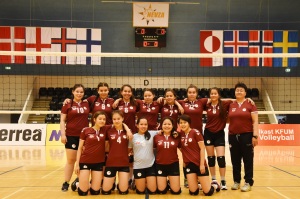 2017 edition of the NEVZA U17 Championships held in Ikast this past week.

The U17 girls from the world’s largest Island, Greenland, made their historic NEVZA debut last week.  Greenland played in Pool B alongside Sweden, Finland, and Iceland. Although the young girls from Greenland did not win any matches, they had a great time in Ikast, thus getting a taste of what it feels to be competing in an international championship in their age group.

The message from the Greenlandic delegation is clear after the NEVZA Championships ended on Sunday: “We are coming back again next year!”