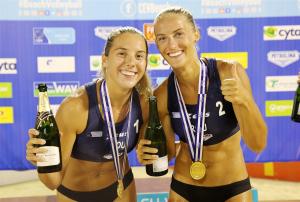 Adriana-Maria Matei and Beata Vaida, who lifted the trophy in the 2017 CEV Satellite tournament in Larnaca.

“When we wake up tomorrow morning, and realise what we have done we will surely not believe it. It feels like a dream come true. It was an incredible atmosphere and we will always have fond memories of Cyprus,” said Matei.

It was described by many as the ‘Final of the Underdogs’, as neither Romania nor Poland were considered at the start of the tournament as being one of the favourites of winning first place.  Having said that, the eventual winners together with Kinga Kolosinska and Jagoda Gruszczynska, representing Poland, played an exciting and open final, which must have left the spectators in the packed centre court satisfied.

Having lost the first set (19-21), one was expecting that the Romanian team would lack psychology and feel more pressure than the opposing team in the second set. Exactly the opposite happened, with Matei and Vaida appearing more eager and hungry for success, winning the set 21-12. The tiebreak was full of strong serving and non-stop action with Romania winning by 15-11 and the big final 2-1.

“Nobody was expecting us to go this far, but we had belief in ourselves and were taking each match at a time.  This proved to be the secret of our success, and as Adriana-Maria said we will always remember Larnaca, not only because we have won but also for the amazing support which meant a lot to us,” Vaida added.

In the match for third and fourth place, which was an all-Russian affair, Yulia Abalakina and Ksenia Dabizha won against their compatriots Olga Motrich and Svetlana Kholomina 2-0 (21-14, 21-13).  “The score line shows that it was a comfortable win but it wasn’t.  We made it look easy with our play. We aimed higher but in the end third place is a success for us, as competition from the other teams was really high,” said Abalakina.

The favourites had the final say in the two finals of the 2017-2018 CEV Youth Continental Cup Qualification Round in both genders. Germany overcame England in the men’s final, with Norway being the eventual winners against the English side in the women’s competition. Both finalists earned qualification to the next round to be played in 2018.

The women’s match was first on show on centre court. The Norwegians Emilie Olimstad and Frida Berntsen showed their intentions early from the start and with an excellent overall performance won easily both sets (21-11, 21-8) against Ellie Austin and Holly Bentley. “We gave our best performance, and we looked solid from the start. It wasn’t really difficult to maintain this kind of play throughout the match as we were rarely put under pressure,” said Berntsen.

To be fair to the Bello twins, Javier and Joaquin, they put more of a fight against the strong and powerful Germans Filip John and Lukas Pfretzschner than their female compatriots did – especially in the first set.  The Germans limited their errors in the crucial stages of the opening set winning by 21-19. The Bello brothers showed their worst self in the second set (12-21), and it was literally a matter of time before they conceded defeat to the vastly improving Germans.

“They pushed us all the way in the first set, but we both knew that if we played to the best of our ability, we would win the set. In the second set, we didn’t change anything in out tactical play, but we limited the risks we took in the first, something which worked wonders for us,” said Filip John.