The first of the three tournaments on schedule for the Beacharena 2017, the CEV Small 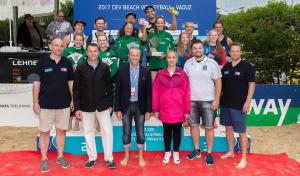 Countries Division (SCD) Beach Volleyball Championship finished on Sunday in Vaduz. Austria’s wild-card holders Florian Schnetzer/Peter Eglseer, the no. 2 seed of the competition held in the alpine principality, claimed the top honours from the men’s tournament as they beat Scotland’s Seain Cook/Robin Miedzybrodzki in the final. In the women’s tournament, Miriam Gormally/Marie-Claire Sabogal secured gold in an all-Irish final.

The Liechtensteiner duo Manuel Gahr/Maximilian von Deichmann, the top seed of the tournament, reached the semi-finals with a consistent performance, but ended up losing to Cook and Miedzybrodzki 1-2 (14-21, 23-21, 11-15) after a weak first set. The home stars fought back, but overall they were not stable enough. Their defence game worked quite well, but the block and side-out were not consistent. They redeemed themselves in the bronze medal match where they beat Antreas Savvidis and Charalampos Zorpis of Cyprus 2-0 (21-17, 21-17). “We knew from last night that we had to win against Cyprus every point more than once, since they are very fast in defence. We remained patient and could win again and, of course, we are super happy with winning the bronze medal here in Vaduz,” Gahr and von Deichmann commented.

Schnetzer/Eglseer won the tournament while competing by means of a wild card as they prepare for the CEV Satellite that will take place at the same venue from next Wednesday to Sunday – where they will start their campaign from the qualification round. The final was balanced and exciting, offering many top-class rallies; the Scots played too weak in the first set but were afterwards on the same level as the Austrians, before losing 1-2 (13-21, 21-18, 11-15), but that was enough to take the gold medal from the SCD tournament.

The women’s youth team of Liechtenstein Belinda Jehle/Michelle Tijkorte finished the women’s competition in third place to claim the bronze medal. Their primary goal was to gain experience from an international competition and improve their skills – and so they did. Gormally/Sabogal from Ireland took the top honours from the SCD tournament as they won the derby with Regina Halpin/Roisin Taieb Roantree 2-0 (21-12, 21-15).

There will now be a two-day break from action at the beach in Vaduz before the start of the CEV double-gender Satellite on Wednesday.