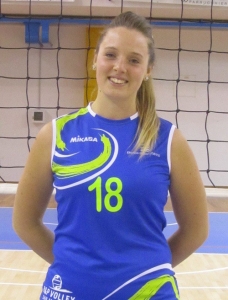 with Riccione. The motivations of opponents had the best on those of the householder who now have to play the second place in the standings until the last match before tackling the play-off. San Marino is discontinuous in the attack and in abutment; finds many winning walls by Vanucci central (9) and Tomassucci (5) which in the end will also be the top-scorer of the team; uses a good of the opposite Magalotti, author of 15 points but in some stretches of consignment disappears from the field playing under rhythm.

In the game, the San Marino depart both strong pushing in abutment, and exploiting good lungolinea attack with Elisa Relatives and Bacciocchi (10/5). A couple of mistakes in attack they advise coach Nanni call time-out on 13/11. The titane resumes and stretch up to 18/12, forcing their times the opponents to the time-out. From there onwards the set row via smooth with the master of the House who continue to push in abutment and close on 25/15. In the second part of the first break is the master of the house (7/4) but the Riccione is in game, falls (9/9) and lengthened (10/14). The BANK OF SAN MARINO in this phase is in difficulty to build game and in abutment and Riccione, for against, play well in defense and improves the reception. Two attacks of the Magalotti and some errors of opponents show the teams in parity (14/14). The Riccione however still stretches (15/18) and this time in a decisive manner. The set closes on 19/25. In the third shooting game the first stretch is girls of Nanni (9/6) but Riccione falls and surpasses, as in the previous set, even for a few mistakes too in the attack of titane (12/13). This time however the BANK OF SAN MARINO reacts and moves back in front (18/15) but Riccione, stubbornly, falls (18/18). He plays on the wire of equal until the end when to close on 25/22 are two winning attacks of Tomassucci and Bacciocchi. Departure rocket of Riccione in the fourth set (1/4) and Nanni forced to call time-out on 3/7. But the team does not react and on 4/11 the banking are forced to the second time-out. Relatives and companions chasing for all the partial and arrive at equal on 20/20. You arrive to the advantages and is Riccione to win the second set-ball (24/26).

The tie-break is very pulled. San Marino is struggling to ground the ball but change anyway on the 8/7. On 13/10, however, FREEZES COMPLETELY AND LOSES undergoing a break of 0/5.

Male National. In the context of preparatory matches in the Tournament of volleyball games of small States, the men’s national team has tackled the Cesena, team series B, losing to tie-break for 3 to 2. In the meeting disputatio on 8 March between the two teams, the natives of Cesena were imposed for 5 set to 0 (it was established to play however five sets). “A good test and a good game – says a soddistato Stefano Mascetti , the head coach of the national team – we played well with some inevitable deburring, I would say that we are well on the way to find us ready to end of May.”