The CEV have recently initiated a “Volleyball at School” project, which is aiming at 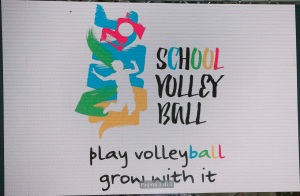 growing the game by involving children and their physical education teachers, thus laying the foundation for the development of the next generation of Volleyball players. On Sunday afternoon, Joao Manuel Teixeira from Portugal had the honour and pleasure of standing on the court of the iconic PalaLottomatica as the official logo and motto he designed for the “Volleyball at School” project emerged on top of a contest that ran across the CEV’s social and digital media platforms earlier this year.

As a result, the CEV will be using this logo and motto to promote Volleyball across the whole of Europe when implementing projects involving school pupils and their teachers – with the aim of increasing the number of Volleyball players by making as many youngsters as possible familiar with the ABC of the game and its quintessential values.

Mr Teixeira travelled on Saturday all the way from Portugal to Rome to enjoy the “total Volleyball experience” shared by thousands of fans from across the whole of Europe – and from overseas as well – and the battle for the top honours in the final, deciding stage of the 2017 CEV Volleyball Champions League – Men.

“The logo includes colours relating to any learning process and children in general, the silhouette of a young Volleyball player, and a number of other elements recalling the movements and actions of someone who is playing the game,” Mr Teixeira explained. “It also conveys the message that playing Volleyball is a cool activity and kids can have a lot of fun with it, regardless of their physical and technical abilities.”