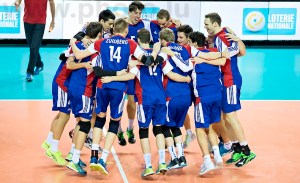 New Year as they retained the title they had seized in 2016 by sweeping three matches in a row at the annual Novotel Cup held in Luxembourg City. Norway emerged as the eventual winners of the women’s tournament which came to an end on Sunday, January 1 before a record-breaking crowd at the iconic d’Coque.

Though the pressure was on them, Luxembourg lived up to the expectations and confirmed their steady, consistent rise and progress by completing a clean sweep of their matches on home soil. The ‘Red Lions’ started their campaign with an epic victory over Germany’s U21 national team where they twice came back from one set down to eventually stamp a 3-2 win (21-25, 25-10, 25-23, 23-25, 16-14). On the last day of the year 2016, Luxembourg repeated the same feat in their matchup with Azerbaijan, a team which is currently working hard to prepare in the best way for the 2017 edition of the Islamic Solidarity Games due to be held in Baku this coming May. Luxembourg were able to stand the stiff opposition brought by Azerbaijan to claim their second 3-2 victory in as many matches (25-23, 19-25, 26-24, 20-25, 15-7).

The 2017 edition of the Novotel Cup came to an end on Sunday, January 1 before a sell-out crowd with Luxembourg cruising to an emphatic 3-0 victory over Iceland (25-17, 25-18, 25-15) to claim the top spot of the podium. Germany and Azerbaijan settled for the silver and bronze medals, respectively.

In the women’s tournament, Norway, Albania and Luxembourg all recorded two victories in the three matches they contested – with Norway netting the gold medal by virtue of the seven ranking points the Scandinavians took from their games. As for hosts Luxembourg, though they started their campaign with a 0-3 loss to Albania (24-26, 28-30, 24-26), the ‘Lionesses’ made amends for this setback by first powering to a 3-2 victory over eventual tournament winners Norway (22-25, 13-25, 26-24, 25-16, 15-10) before routing Liechtenstein 3-0 (25-16, 25-7, 25-17) in their last match of the competition – and their first one in the New Year.