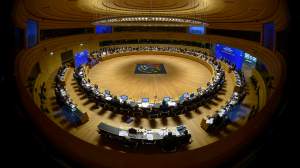 morning with a focus on actions and plans being designed to herald a new era for Volleyball in Europe. A first draft of the CEV Strategy 2020 was shared with all attendees, thus laying the foundations for further discussions on how to best grow Volleyball at all levels and ultimately make it one of the top sports in all of the 56 member National Federations.

A live gallery of the XXXVII CEV General Assembly is available here.

The CEV Strategy 2020 is the outcome of a collective effort involving all National Federations and relevant stakeholders. It outlines the main purposes and mission of the organisation, identifies guiding principles to help make the right decisions when these have to made as well as a number of strategic priorities.

To further lift Volleyball, it is necessary to cultivate a sense of togetherness as well as the core values of collaboration, excellence and visibility with the ultimate goal being to establish it as one of the top 5 sports in each of the member Federations.

The identification of a number of guiding principles should herald a new era for Volleyball in Europe: prioritise exposure over revenue, pursue success in leading markets, make sure support is provided in exchange for commitment and is driven by demands, provide National Federations with accessibility to competitions and programmes while acting fast because the world is changing every day and does so at a very fast pace. The CEV strategic priorities were identified as products, promotion and partnerships. More feedback will now be collected before the CEV Strategy 2020 is finalised in early 2017 and further discussed with the CEV leadership and its eventual implementation begins.

CEV President Aleksandar Boričić also announced the re-establishment of a European Coaches Commission and the introduction of an Athletes’ Working Group to further involve such important stakeholders – athletes and coaches – and benefit from their positive energy, knowledge and experience to raise the profile and popularity of Volleyball to the next level.