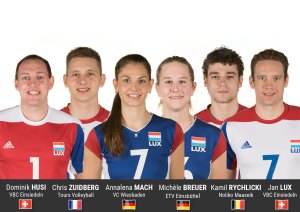 Never worrying LëtzVolleyballer were active abroad. At this point we endeavor to regularly update it to you like them exist and where they are considering their association. Kamil Rychlicki for the training assured his new Klubb Noliko Maaseik

Belgium has recently started 2 weeks. currently mainly carbs Athletiktraining program. Chris Zuidberg will contribute Tours VB and its second season. After Trainerwiessel during the last season he has become more difficult in the first team to manifest. The new coach Giampaolo Medei, talking Assistant Coach of Olympic Sëlwermedaille winners Italy, should it change again in the Chris his motivation is ongebremst positive. Training with the first team starts honored the 29th of August.

As the third highest level in Europe (baussend Luxembourg) plays Annalena Mach received his third season with 1. VC Wiesbaden. Nice to be maintained alongside the training currently making a lot of traveling to advertise to the people for our Lieblingssport unnoticed. Like volleyball carbs for Annalena but also still have to study biology program and there will be this year’s Bachelor. Bonne chance Annalena to the field and also on the university.

Next are still a few other players / inside active abroad. Switzerland play with Éischtligist VBC Einsiedeln with Dominik Husi and Jan Lux equal 2 of our team. 3. In the German league assured the ladies get Michele Breuer for ETV Eimsbuettel
(3rd League North) to the network. She will be revealed in October assured the staff capability when his studies in Hamburg
eat. Until there she was standing at the National Training fit.

You can even need to say how our Lëtzvolleyballer assured their clubs so quickly.