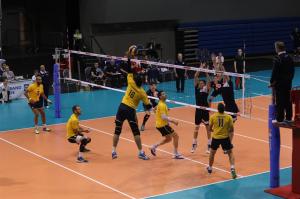 at the first-round qualifier for the 2018 FIVB Men’s World Championship held in Reykjavik this weekend. This way the Cypriots also secured their participation in the final stage of the 2017 CEV Volleyball European Championship – Small Countries Division that will be taking place in the Icelandic capital next year. Hosts Iceland completed the programme of the final competition day with a speedy 3-0 victory over Andorra to secure their progression to the SCD Finals as well as to the second stage of the World Champs qualification process scheduled for May 2017.

Cyprus claimed the first match of the last competition day in Reykjavik after Scotland put on a fight which lasted for five sets. The first set was a close race from the beginning to the end. The Scottish team had a great start in the second set and led 8-3 at the first technical time-out. Cyprus caught up and levelled the score at 16-all; after that, all numbers were even until Scotland finished the set in their favour. The third set was played exactly like the one before, except that Cyprus led from the beginning and the Scottish team evened the score at 16-16 and finished ahead in the end (25-22). In the fourth set Cyprus kept the lead throughout the entire period and they eventually won also the deciding tie-break despite a great effort from the Scottish team.

Gabriel Georgiou was the best scorer for Cyprus with 18 points and Jamie McHardy scored 24 times for Scotland in their losing effort.

The Scottish team has now to rely on the Icelandic team to get only one or two points from their match against Andorra to finish second in the pool.

Dimitre Letchev, coach of Cyprus, said that the game was the best performance of the Scottish team in the tournament. And although his team was already sure they would finish on top of the pool standing, he praised the soul and spirit shown by his players in this third straight win.

The Icelandic team is through to the second round of the 2018 FIVB Men’s World Championship qualification process after their comprehensive victory over Andorra (25-8, 25-18, 25-17) on the final day of competition in Reykjavik.

The team from Andorra didn’t show any real resistance in the first set of the match, something that the Icelanders used to their advantage. The second set was a bit more interesting with some good playing from both sides. The third set was a pretty comfortable run for the Icelandic team, which secured their historic ticket to the next round of the FIVB World Championship qualification process.

Kristján Valdimarsson scored 13 points for Iceland and Cristian Salvador was the top scorer for Andorra with 14 points.

Rogerio Ponticelli, coach of the Icelandic team, said that the key to the win was that his players kept their head cool, even if the match could be called the most important one in the history of Icelandic Volleyball.

Click here for more info including detailed stats of the matches