The Icelandic men’s Volleyball team will be hosting this coming weekend their counterparts from Andorra, Cyprus and 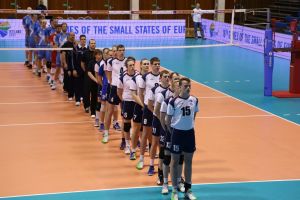 Scotland for a single-round robin tournament which counts for the first stage of the European qualification process for the 2018 FIVB Men’s World Championship as well as for the qualifying stage of the 2017 CEV Volleyball European Championship – Small Countries Division.

The World Championship qualification process started last weekend when the national teams of Northern Ireland and the Faroe Islands were hosted by Luxembourg at the iconic d’Coque, where the home team finished on top of the final standing and Northern Ireland came in second. These two teams have therefore secured their place in the second qualifying round of the 2018 FIVB Men’s World Championship, which will take place in May 2017.

The tournament coming up this weekend in Reykjavik coincides also with the qualifying stage of the 2017 CEV Volleyball European Championship – Small Countries Division (SCD). The winners as well as the runners-up will secure their place in the Final Round, which will take place in Reykjavík, Iceland in 2017.

This is the third year in a row that the Icelandic Volleyball Association hosts an international tournament. The Games of the Small States of Europe (GSSE) – whose programme included both Volleyball and Beach Volleyball – were held in Iceland last summer and in 2014 the country hosted another SCD qualifying tournament.

The tournament starts on May 20 with Andorra playing Scotland in the opening match before hosts Iceland take on pre-favourite Cyprus.

Click here for more information including a detailed match schedule