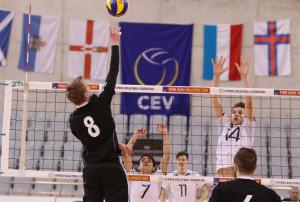 The hosts are hoping to reclaim the title they lost in 2014, when they stayed away from the competition, by winning their third gold in five editions of the event. Luxembourg will be looking at repeating their success of 2008, when they won their only gold in history so far.

In semi-final action, Cyprus fought hard for two sets against a plucky Scottish side, but then broke away 10-2 in the third set and never looked back. With Stephanos Haridimou getting 20 kills in 34 swings for 59% and scoring 22 points in all, Cyprus outplayed Scotland at the net, both in blocking and in attacking efficiency for a 3-0 (25-18, 25-18, 25-15) win.

San Marino and Scotland will vie for bronze on Sunday. It is a setback for the reigning champions, while San Marino will be looking at repeating their bronze-medal performances of 2006 and 2008.

Click here for more info including detailed stats of the matches